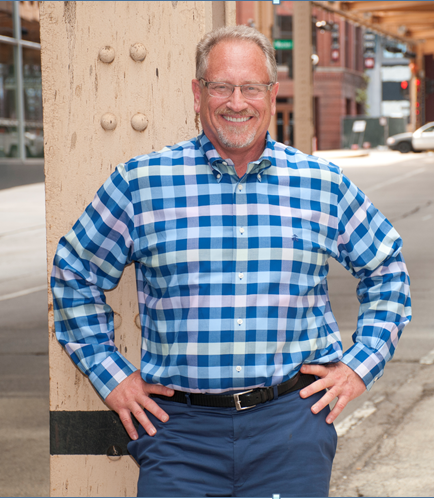 David Kluever was larger than life.  His was the voice that entered the room before he did, his boisterous laugh was contagious, his loyalty, compassion, and empathy were unparalleled, and his presence lingered in a room long after he departed.  He was an exceptional mentor, a fiercely steadfast friend, a loving husband, and a devoted father.  David exemplified a life well-lived.

In whatever role you knew him, from whatever vantage point, David stood apart as someone special. He gave his all to everything he touched.  He poured his energy and enthusiasm into the Firm, his employees, and everyone who had the honor of working alongside him.  David was bright, logical, and systematic in his thinking. He was always willing to invest in those around him, sharing his time, ideas, and insight.

David began his legal career as a criminal prosecutor before moving to private practice, where he specialized in commercial loan transactions, creditor's rights litigation, and other compliance and contractual litigation.  After a position as an associate in a Chicago-area firm and a partnership in another, he co-founded Kluever & Platt, which he built into one of the most respected default litigation law firms in the nation.

Through the significant legal victories and precedents David helped establish, he became known for his highly-regarded strategic legal skill set and dynamic courtroom and boardroom presence. He was nationally known as an excellent corporate lawyer, a successful trial and appellate litigator, and an entrepreneurial trendsetter.  Over his almost 4 decades as an attorney, David demonstrated his understanding that clients needed and deserved efficient, value-based legal services.

His many awards and public recognitions reveal that his was a distinguished career of considerable import.  David preached—and practiced—perfection, and he expected it from everyone he worked with, not because it was some personal quirk, but because he knew that expecting perfection would enrich us all, professionally and personally.  He was relentlessly determined to succeed and a caring person who loved life and all that it offered.

David was the heart and soul of our firm, a driver and an innovator, a planner, a man with a vision for the future who was always looking around the legal and technological corner, the man behind the scenes (and, occasionally, right in your face), and one of the greatest legal minds we have ever known. More importantly, he was our friend.

Despite his devotion to his work, David always found time for his colleagues and friends.  He had a unique ability to connect with everyone around him and forge lifelong friendships in the most unlikely of places.  He relished his annual “boys' trips” and glamping adventures, would start planning his winter ski trips in July, loved entertaining in his backyard, and looked forward to any opportunity to gather with those close to him.  David invested deeply in his friends and family; he was first in line to celebrate their successes and the last to leave when they needed his support and guidance.

The most important relationship in his life, though, was that of his beloved family.  Nothing brought David more joy or pride than the love he had for his wife Lisa, their three children, Bradley, Meredith and Erik, and his parents and siblings.  He could spend hours sharing stories about his family or boasting about their well-earned accomplishments.  David wouldn't hesitate to answer a call from his family in the middle of a meeting or change travel plans to ensure he got to spend those few extra hours with the ones he loved.  In spite of all of his professional accomplishments – and there were many – the role he cherished most was that of husband and father.

David's love for his firm, its employees, and the wonderful work we do for our clients lives on in his legacy.  The true measure of a man is how much love he gives; how selflessly he shares whatever he can to help others; how consistently he lifts up those around him with a kind word, a funny joke, a compliment, or a humble ear.  By this measure, David was immeasurable.  He will be missed by many, but he will never be forgotten by those who were fortunate enough to have known him.

Memorial contributions may be made to https://www.driftlessconservancy.org.

ALFN provides the information contained in this site as a public service for educational and general information purposes only, and not provided in the course of an attorney-client relationship. It is not intended to constitute legal advice or to substitute for obtaining legal advice from an attorney in the relevant jurisdiction.